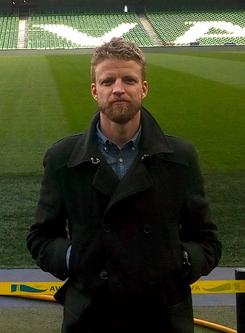 Gavin is a M.Phil History graduate of Trinity College Dublin and Education graduate of NUI Galway. For 7 years he worked with the award-winning Historical Walking Tours of Dublin as a tour guide, often leading US college groups. He has been working part-time with Sports Travel Academy since 2013 and quite enjoys leading groups in Europe and especially in his native Ireland. Gavin has also worked as a history teacher and a college tutor to US college summer abroad programs in Irish history, language and literature. Having been brought up playing Ireland's indigenous sports, hurling and Gaelic Football (and dabbled in a bit of soccer), he is now an avid distance runner, with a PR of 2:30 and with many marathons under his belt.  He is still a big admirer of Ireland’s rich sporting heritage, especially the GAA. He loves to get back home to Dublin several times a year and share his home city and country with US students and faculty.

Gavin is from Dublin but now resides in Durham, North Carolina after relocating for his wife's medical career at Duke University Hospital. When he's not taking care of his two young children he volunteers as a GED tutor at a local literacy centre and at Durham's History Museum. He is also currently researching Irish immigration and settlement to the American South in the 19th century as well as working with us part time with our European groups.

He is a wonderful addition to our team and brings a true Irish authenticity and a wealth of knowledge to our groups in Ireland and around Europe.